Our little Hungry, Hungry Harpo loves to eat! Clearly I spend as much time feeding her as I do taking pictures of her hungry little cuteness. 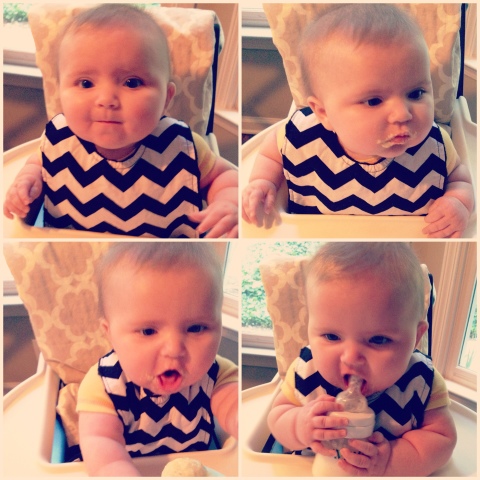 At her four month well visit, our ped gave us the go ahead to start giving her baby cereal. As I’ve mentioned before, we feed her oatmeal rather than rice and have just started mixing in some fruits & veggies! After reading some reviews, we have been giving her Earth’s Best & Plum brands. They are organic (I swore I wasn’t going to be that mom, but turns out, I am) and they all taste good! Yes, we’ve tried everything we’ve ever fed to her.
We started with cereal once a day for two weeks, then upped it to twice a day, the second feeding being at 6 pm when we eat dinner. At five months, we started mixing in one food at a time into her cereal. I give her about 1.5 oz of baby cereal mixed with milk – and then I add in 1-2 oz of her fruit/veggie in with it. I AM TOTALLY WINGING THIS. I have used our doctors directions along with the gazillion things I have read online as guidelines, but at some point, you just have to decide for yourselves. 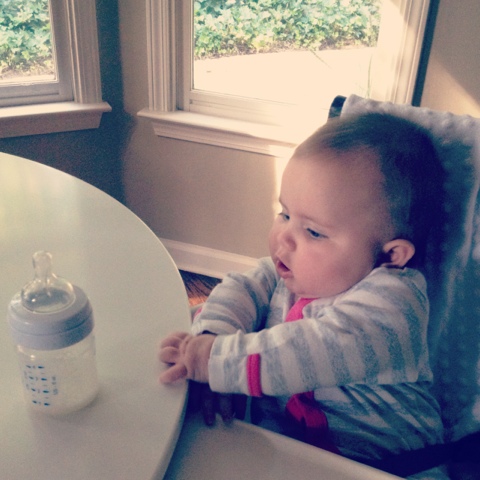 She then finishes her bottle after she eats, which is much more her style since she can SLAM it. Then as soon as the bottle is gone, she hoots and snorts, reaching for her empty bottle & bowl. Are you sure it’s all gone?!
We have also learned that she hates peas. Which is ironic, because we hate changing diapers when she is eating peas. 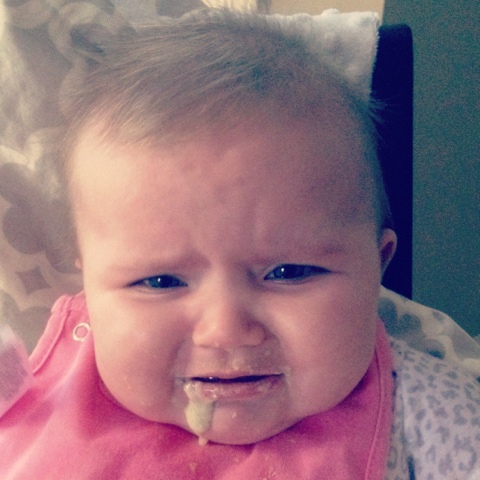 So far she has had Sweet Potatoes, Apples, Squash, Peas, Pears & Bananas. Some people say fruit first, others say veggies first… we did it in this order. Once again, winging it, parents of the year.
My next adventure is going to be making some baby food of our own! I’ve read some awesome tutorials on pinterest, with great tips on how to make & store in bulk. I’m all about saving money, plus I love cooking, so hopefully it is successful! 🙂 And I will be sure to share!
Also, I wanted to thank everyone for the awesome advice on the post about Harper’s whack sleep habits. You know your shit’s crazy when you threaten your husband to sleep in the guest room as a joke and he says OH MY GOSH, CAN I PLEASE?! Ha! It is official – baby girl is TEETHING. So far she has not been grumpy at all, but sleep has still been a little rough. She does sleep in her pack n play in our room at this point, but will be going in her crib shortly. Once she is a little better at rolling from her belly to her back (and our blackout wood blinds arrive to block out the awful street light that shines in her window!)… she’s off to occupy her own little Harpie digs.
3
The Day My Baby Stopped Sleeping.
The Makings of a Playroom!