I don’t even know if I can put words in this post that can express my excitement of Harper’s First Halloween. I will start by saying, that I couldn’t even sleep on Halloween Eve (of course) because I was so excited… and also freaking out a little bit about her costume that needed some last minute changes. But, we ended up having such a blast! I always imagined that Halloween would be so much more fun with kids, but I had no idea! 🙂
Of course she had to rock the most adorable Halloween outfit all day for our errands! 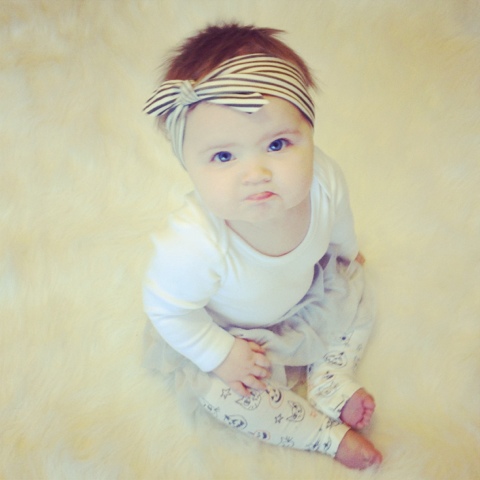 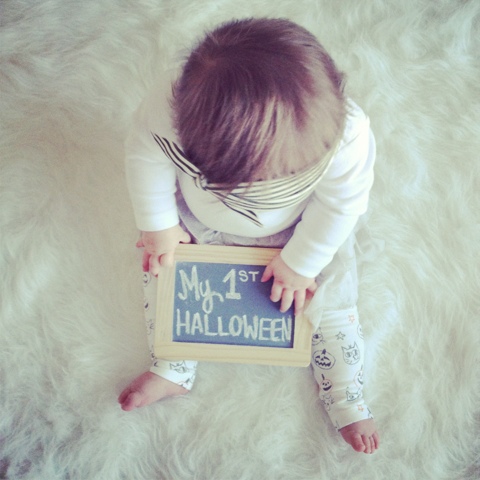 Tights & TuTu are from Gap last season
I went back & forth a million times about her costume, but finally decided that I had to incorporate the tights that originally made me want her to be Tinkerbell. I just couldn’t find things to match that green (and mis-matched shades of colors totally drive me nuts!) so we had to do some last minute shopping to find just the right stuff! In the end, I found this adorable skirt in the toddler clearance section at target that I was able to make into her dress! I bought a matching pair of kids spandex shorts (in the same shade of green) and made that into to the top part of her dress, and used some of the scraps to add some extra flair to her headband! Finally… the perfect little TINKERBELL! 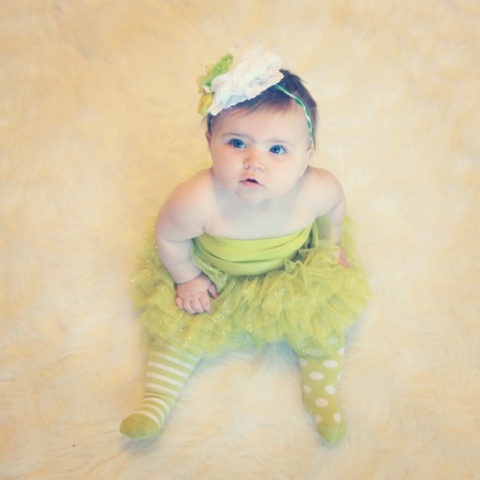 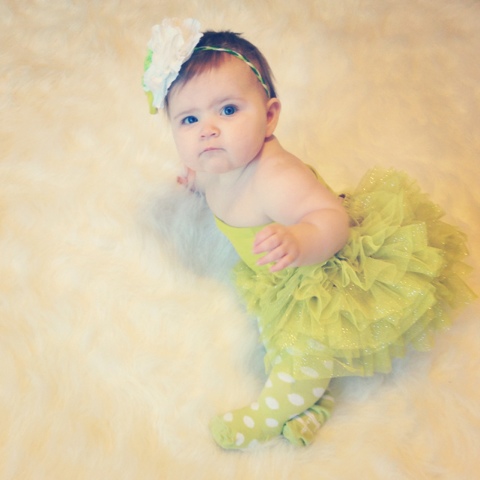 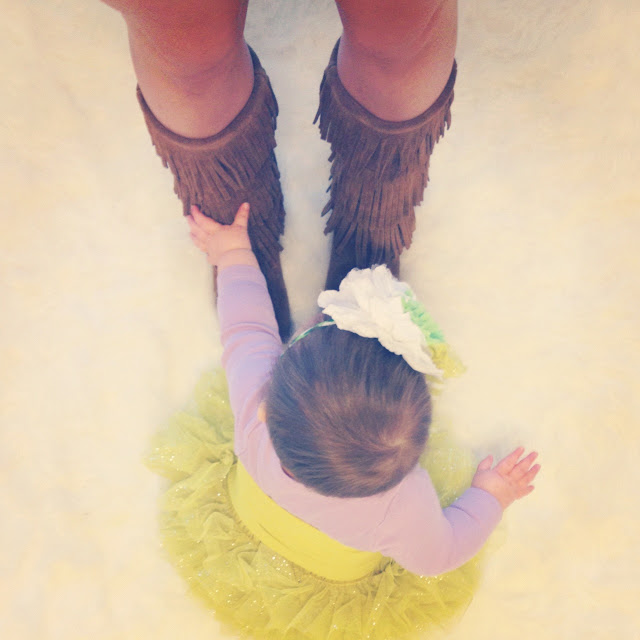 Purple Onesie, Fringe Boots
I dressed up as Tiger Lily & couldn’t wait to take her Trick-or-Treating for the first time! I bought a plain brown dress & made the top of my costume from some cream felt & ribbon. Also, I can’t sew, so a hot glue gun was my weapon of choice. 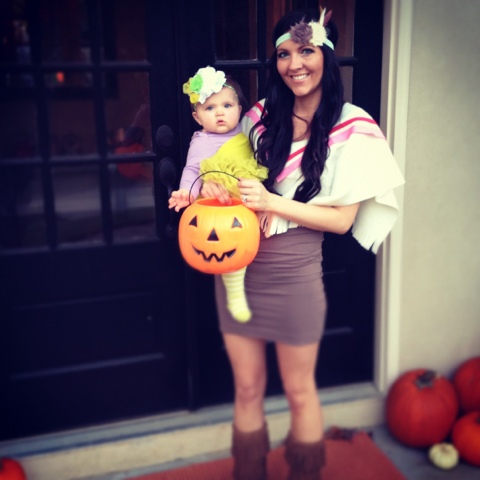 Jameson Monroe Headband, Fringe Boots, H&M Dress
Brandon was going to be Rufio from Hook, but last minute he just decided to wear his lumberjack costume (aka. nothing). We saw that other people in our neighborhood were tailgating, literally TAILGATING, in their driveways for Trick-or-Treaters, so it was more important that he set up the fire pit, get S’mores & fill up the coolers than dress up. 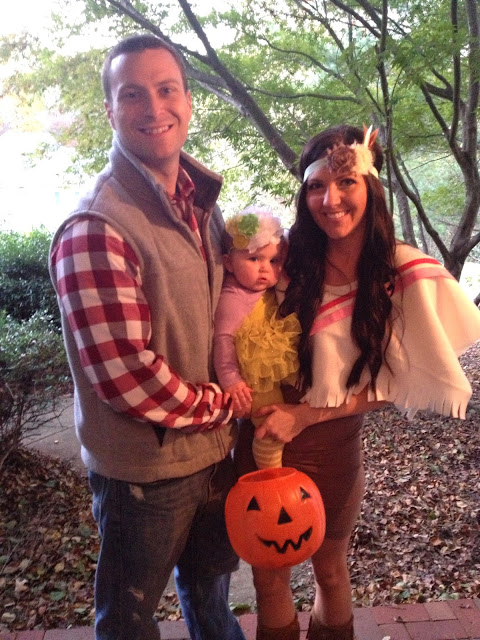 We went to a few houses in our neighborhood, really just the people on our culdesac that we know, and walked around a bit with the little girls next door.  Harper of course had a blast shoving her hand in the candy bowl to see what she could grab! 🙂 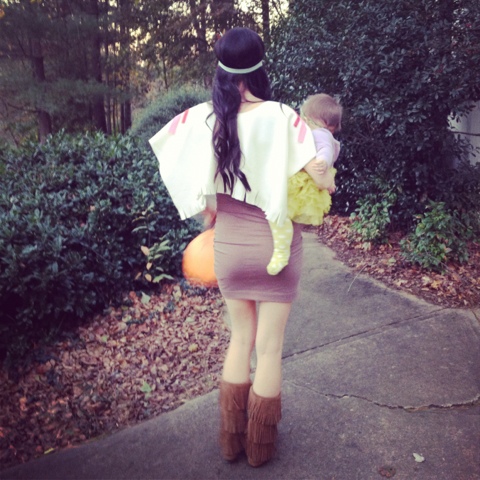 Little Tink didn’t make it very long, only a few houses and then she was out for the count. I love this picture of Dad carrying her with her little tired face. 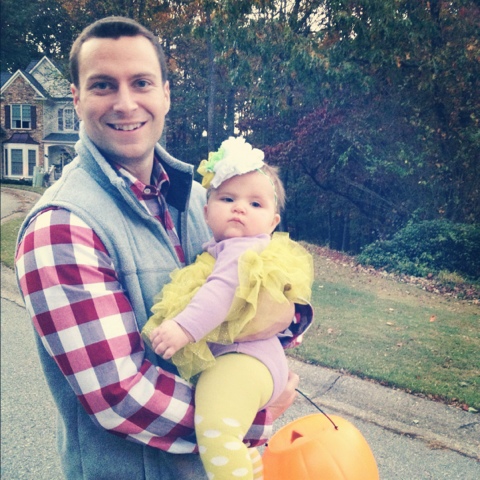 And at the end of the day, we were able to mesh pictures from hundreds of miles apart for the cutest little Peter Pan & Tinkerbell of all time! 🙂 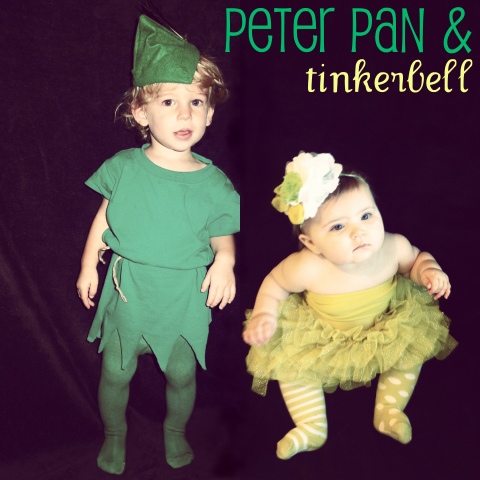 I hope you all had amazing Halloweens!! I love looking at all of the cute baby costumes out there, cannot wait for next year (we already have a costume idea in mind!) But most importantly… it is now officially the HOLIDAYS! I am so excited to take down our Halloween stuff today & replace Hocus Pocus with Christmas Vacation in the DVD player for the next two months.
‘Tis the Season to be Merry!
14