I have attempted to write this post so many times & I end up staring at a blank screen. I don’t even know where to begin with our  breastfeeding journey, how it went wrong or how I ended up in exclusive pumping territory so I will attempt to piece this together as best I can.
Before Harper was born, I had every intention of breastfeeding as long as I could. We took classes, read books, talked to our experienced friends, we were ready to roll. I had a scheduled c-section (because Harper was breech, you can read her birth story here), and immediately after the surgery was over, we were wheeled to recovery where the nurses assisted in getting her latched for the first time. I felt like things were going well, we were bonding, she was getting colostrum & I didn’t feel much pain. After about 24 hours in the hospital, it seemed like things weren’t really progressing with her latch, we met with a lactation consultant & eventually ended up feeding her a little bit from a plastic spoon. We continued to get help from our nurses & two other lactation consultants while we were in the hospital, but Harper just couldn’t latch properly. On day 3, she had lost over a pound & our nurse told us that it was time to supplement with some formula. I was totally against it. I vaguely remember wanting to rip my husband’s head off when the nurses finally talked us him us into it & he got to bottle feed her for the first time. I yelled at him saying that he only agreed to give her formula because he wanted to feed her. (wow, I was an asshole!) 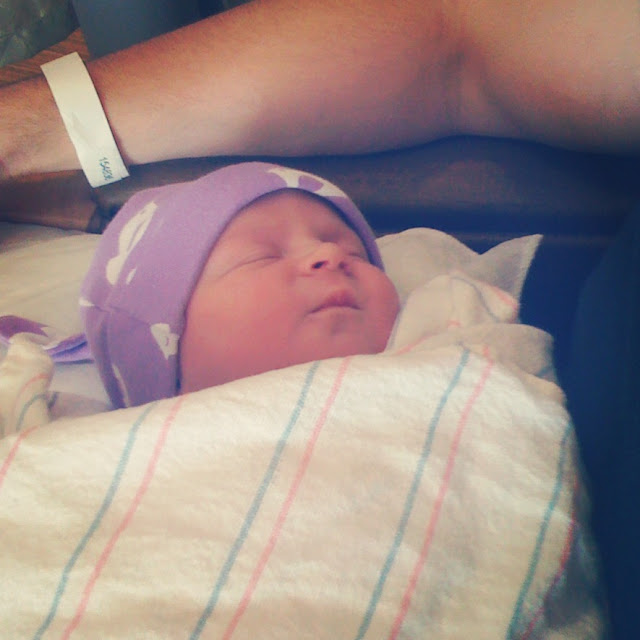 Long story short, the lactation consultants recommended using a nipple shield as a temporary solution. It seemed to help with her latch for the most part, but apparently does not allow for proper milk stimulation, so it required pumping after each feeding. 10-15 minutes of breastfeeding on each side with the shield plus 10-15 minutes of pumping after. Then I could feed Harper the rest of the pumped milk after or save it for the next feeding.

I purchased the Medela Pump in Style Advanced

before she was born, so we were lucky to have it waiting for us when we got home since we used a hospital one during our stay. It was well worth the money!

Our feeding routine eventually looked something like this:
Breastfeed with nipple shield – 20 min.
Pump (both sides at once) – 10-15 min.
Cry because I hardly produced any milk – 2 min (sometimes 2 hours)
Bottlefeed with rest of milk – 10 min.
Wash Pump Parts & nipple shield for next round – 10 min.
Contemplate putting all pump parts down the garbage disposal & running the actual pump over with my car – 30 seconds (sometimes longer)
Repeat 2 hours later.
We quickly learned that this was just not really working. I kept trying to get her to latch, we met with another lactation consultant to try to wean from the shield & I was not producing enough milk, so I was sometimes supplementing with formula. She also spit up EVERYTHING, like projectile liquid the second she was done eating, all over herself/us/earth. Then, she starting to refuse breastfeeding all together since it was just so much easier to drink from the bottle. Finally, we made the executive decision that if I had to pump ANYWAY, we might as well just go that route & stop forcing it. From that point on (Harper was almost a month old), I went to exclusively pumping. At this point, she was eating every 3 hours (spitting it all up immediately after), with usually one (sometimes two) 4 oz. bottles of formula in the mix to supplement. 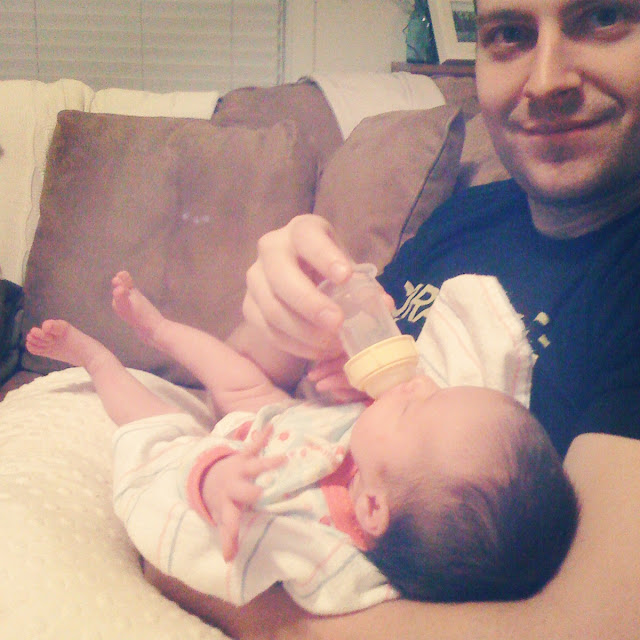 I was on maternity leave for 8 weeks, but then I worked from home. Sounds great right? It was nearly impossible to actually work all day, while feeding+pumping+washing took almost an hour, every three hours. I also HATED the actual pumping process. It was painful & so inconvenient. Not to mention, Harper was sleeping through the night at five weeks, but I couldn’t get through the night without waking up in pain with clogged milk ducts, so I still had to wake up once or twice in the night to pump. Seriously, fuck that. The only thing worse than waking up to your crying baby is waking up just to stick your boobs in a vacuum. I remember my husband telling me how he would dream of the “black-ops. black-ops. black-ops” sound in his sleep. I longed to just be able to put the baby on the boob when she was hungry & be done with it. 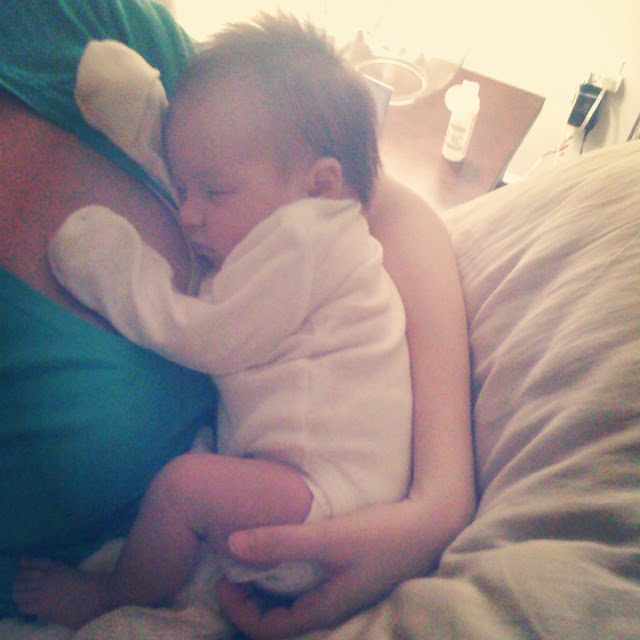 Eventually I got the hang of it & was able to produce enough milk, but the spitting up just kept going. It was tough to work so hard to pump that milk & then watch her spit it up all over the couch. The doctors kept telling us that as long as she was gaining weight & not crying when she spit up that she was fine. BUT she was grumpy/cranky/gassy all the time. I tried cutting a million things out of my diet, switched bottles eight hundred times, paci, no paci, different positions, etc. Our doctor gave us a sample of Similac Sensitive Formula

at one of the appointments & told us to try that as her supplement for a little while. We were skeptical, but willing to try anything at that point.
And whaddaya know. She didn’t barf it up. We tried it again the next day, happy baby, no spit up. Then we gave her two bottles of it, then three & I swear. to. God. she was a whole different baby. To this day, I will never know what it was about breastmilk or other formulas that her tummy couldn’t handle, but that sensitive formula did the trick. I kept trying to force for her to keep having breastmilk, but eventually realized it was more for me & less for her. Around five months, we finally decided to call it quits. I kept pumping for a little while JUST in case we changed our minds, slowly decreasing pumping sessions by one every other day. We soon had a freezer full of breastmilk popsicles & a baby totally content with never drinking it again. It was time to say goodbye to the pump. I was pumping around 3 times per day. I actually went with old wives tale of putting cabbage leaves in my bra, and wa-la! It worked! Just three days later, no more milk (and no more boobs). My husband was awesome throughout this whole experience, he was very pro-breastfeeding as well, so it could have gone either way with us trying to make decisions together. He was honestly such a rockstar throughout the entire process.
Tips for Exclusively Pumping:
Despite elaborate plans, nothing ever goes the way you want it to. I ultimately had to do what was best for us & stop worrying about what everyone else would think. I was terrified to tell other moms that I wasn’t breastfeeding her or thinking about who was watching & judging me in restaurants as I made a formula bottle for her.
This may not be the most helpful/insightful post, but this is my experience. I know there are probably a million other things we should have/could have done, but I know that I gave it my best & Harper turned out just fine. She has always been an extremely healthy baby & she is a great eater. 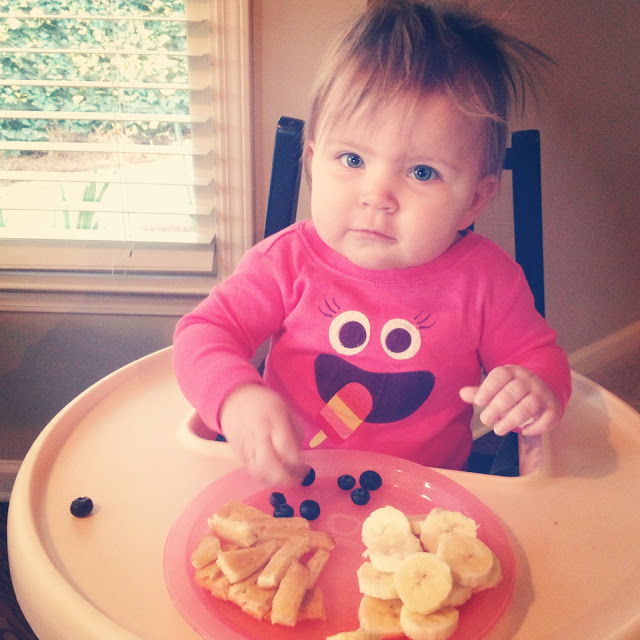 I love this little girl more than life itself. All I ever want to do is make the best decisions that I can for her, and in this situation, I think we did. I look forward to giving it another shot with baby number two, someday.
I also look forward to putting my pump in a bonfire after it’s all said & done.
8
Mama + Mini
Our Day in Pictures.