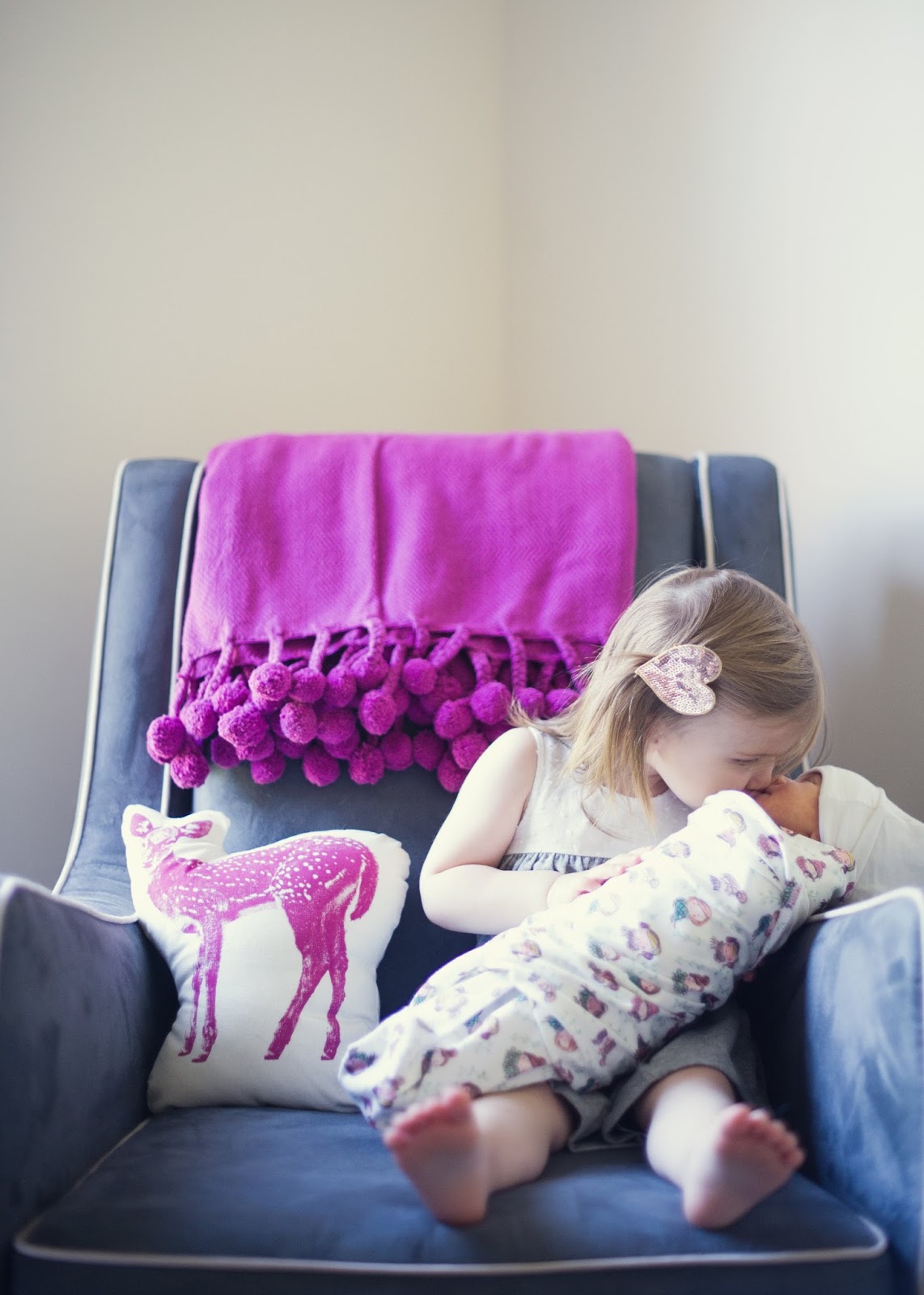 Here we are, well into our third month of being parents of two kids, and I think I can finally say that things have gotten easier. Life feels normal (and wonderful) again, we have established routines that make everyone happy & things are good.

I have more friends than I can count that are pregnant with their second, in fact, most of them with their oldest child right around Harper’s age as well, so I thought now would be the perfect time to put together some of my thoughts on things we have learned with baby number two. Please remember though, these are just our experiences, I am not one to give unsolicited parenting advice, so take this all with a grain of salt! 😉
1. Prepare your toddler ahead of time. There isn’t necessarily a right or wrong way to prepare your toddler for bringing home their new brother or sister, but I do think there are lots of things you can do to make the transition easy on them & easy on yourself. For starters, getting out baby gear weeks in advance to let your toddler get used to it & possibly put their baby dolls in it will make things a little less shocking when you bring baby number two home from the hospital. Harper already knew how to use the rocker, not to put things in the crib, etc. all before we had Eloise here. Doing things like potty training or a big kid bed transition before having a baby around will save you a lot of frustrations, potty training has been crazy hard as I am home with both kids, two hands doesn’t quite cut it when I am feeding Eloise & Harper needs help going to the bathroom. Another small thing that we found to be very helpful was teaching Harper how to climb up into the car & get into her own carseat before Eloise came. We practiced for Harper to climb in around the infant seat & over into her own seat, so I can easily take them both outside together, let Harper climb in, put Eloise in hers & then walk around to the passenger side to do Harper’s buckle.
2. Have no expectations, every child is different. This was a hard lesson learned for us. We kinda assumed that if we did all of the things we did with Harper, our second baby would react the same way that Harper did. We thought having the same bedtime routine (and the swaddle, noisemaker, paci, etc.) would result in the same sleeping patterns. Turns out Harper really was just a good sleeper & Eloise, not so much. We kept finding ourselves saying things like “Harper never did this…” or “Well, when Harper was this age…” but really, Eloise is her own little person & we needed to let her be that person, without any expectations.
3. Save everything. I can’t tell you how many times I’ve found myself digging around in storage bins praying that I kept something, specifically one of the swaddle sacks that Harper hated that ended up being a lifesaver for our ninja Eloise who karate chopped her way out of her swaddle blanket every. single. time. Or the pacifiers that Harper hated & I threw away, turned out to be the only ones that Eloise liked. The girls are so different & really like different things so far, I can only imagine what this means for us as they grow up! 😉
4. Be open to new routines. Things like mornings & bath/bed time were extremely hard for us when Eloise arrived. We were desperately trying to fit our new baby into the routine that we already had, when in reality, it took us a full two years to get there in the first place. So we took a step back & made some adjustments. For example, we decided that rather than try to keep Eloise awake until 8 so she could take a bath the same time as Harper, we would move the entire bath time routine to much earlier, then just let Harper stay awake after for a while. And instead of rushing downstairs for an early big breakfast, we would take it slow & have our milk/coffee in bed so I could feed Eloise at the same time. We found that it was much easier to switch up a toddler’s routine than to push limits with your newborn or burn yourself out by trying to juggle it all.
5. Things will get easier & infinitely better. Three months is the sweet spot. Even two & a half months is pretty darn good. I won’t lie, those first few months are pretty extreme (at least they were for us) & I found myself worrying that things may never get better. But everything is a season, and while your baby is making major strides in the first three months, so are you. You will learn what works best for your family & how to eventually manage two kids with the same ease that you had with one.
I hope that is helpful for those of you expecting baby number two. Don’t get me wrong, things will still probably be so chaotic at times that you will want to pull your hair out (although it will be falling out anyway), but it is worth it & really is the greatest blessing.

PS. You can also find some of the gear we have loved for two babies in this post. XO

Come in & cozy up! ✨ Still need to paint the fro