I thought I’d follow the same format as the one year update going forward for each month since Harper is changing so much these days! I swear, every day we tell each other that THIS is the most fun age. She is so full of personality, so silly & totally entertaining.
Age:14 Months
Favorite Foods: Blueberries, Pasta, Grapes, Strawberries, Pancakes
Favorite Words: Nice (pronounced Niiiiiii), What’s That? (pronounced W’sat), Wow (pronounced Bwwwwwwow) 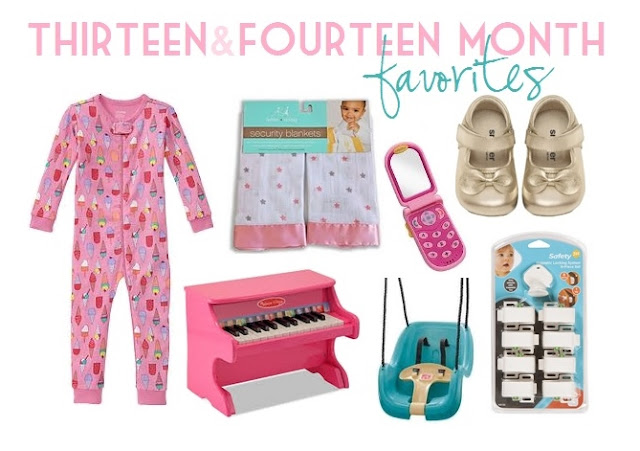 Favorite Things:
Footless Zip Pajamas | With Harper literally running laps around the house lately, we are giving up on footed pajamas & hoarding these footless zip PJs from here on out. It’s rare to find them, but they are in season right now with the warmer weather, so we are stocking up!
Aden + Anais Security Blankets

| Harper has always gotten her security blanket & paci at bedtime only. She loves them so much & I think it really comforts her to have them. Lately she has been almost weaning herself from her paci, shaking her head no when we offer it or at least spitting it out after just a few minutes. She has become very attached to her blanket though & loves it more than ever. I think these are going to be our saving grace for keeping her happy during naps & bedtime.
Melissa & Doug Piano | This was a gift recently & she LOVES it. It is one of the most annoying toys of all time in terms of sound, but she loves to bang on it all hours of the day. It’s also the most fun toy to play with together, since she can sit on my lap & we can play music together. (I learned Yankee Doodle the other day & which makes me feel like a total badass).
Flip & Peek Phone

| She carries this with her everywhere she goes. Somehow it got switched to the Spanish setting though & I don’t know how to turn it back, so it always says Hola! Which she loves. And tries to repeat. But then just says “ah-ahh” & throws it over her shoulder. I love that it’s small so I can throw it in the diaper bag too.
Infant to Toddler Outdoor Swing

| This is an absolute MUST for spring/summer if you have the trees/porch space for it. It’s so fun for her to be able to swing at home instead of having to venture to the park every time we wanna hang outside. Plus they fit up to 3 yrs. of age!
Gold Bow Flats | This brand of shoes is ideal for first walkers (and kids who are always trying to take their shoes of). I wanted something more versatile for cool or warm weather, so I got these & love them. Harper picks them up every day & brings them to me, sticking her feet out for me to put them on. The cutest thing. Plus they come in gold or silver metallic so they match everything!
Safety 1st Magnetic Locking System

| I’ve already professed my undying love for these to childproof doors/drawers in this post, but seriously. They’re so great. We also purchased this Fireplace Hearth Cover

which in my opinion is the best out there. I actually fell face first onto a stone fireplace when I was 3 & split my head open. It’s not the prettiest thing but it is a must have for safety. 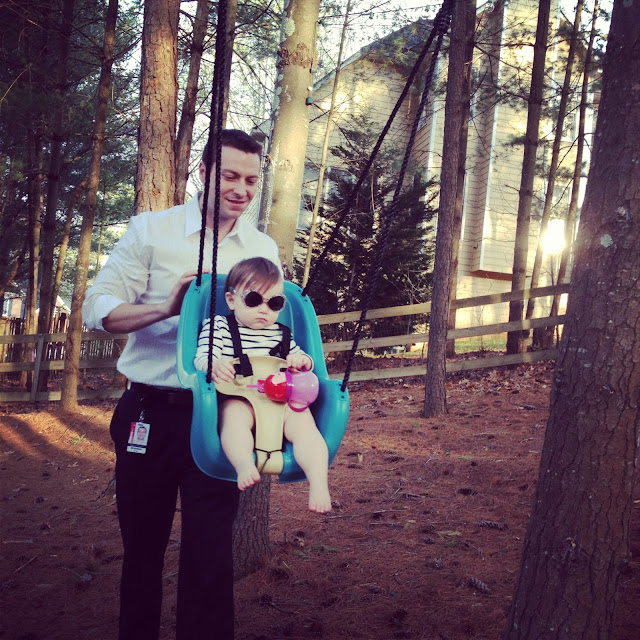 Favorite Activities: Wagon Rides. Mean mugging. Chasing the cat (hilarious video here, you’ll hear her saying “nice” at the end, which is what we are trying to teach her for how to pet, it is SO funny).
She also loves watching Noggin videos, every night after dinner while I clean up the kitchen, she watches a playlist of Noggin songs & seriously gets so excited. I actually really like the songs, I think they’re so cute & catchy. We don’t really watch much TV so this totally gets her undivided attention when I turn it on.
Least Favorite Activities: Diaper changes, getting out of the bathtub & the word “no” (we get an instant pouty bottom lip from her & sometimes tears). Go figure.
Signature Moves: Walking with her arms straight out (Frankenstein style) making a Chewbacca gurgling “oooooooohh” sound when she wants something. She also squeals at the top of her lungs & crinkles her nose when she gets really excited. Both are most often heard when I get out my chapstick or we are blowing bubbles. 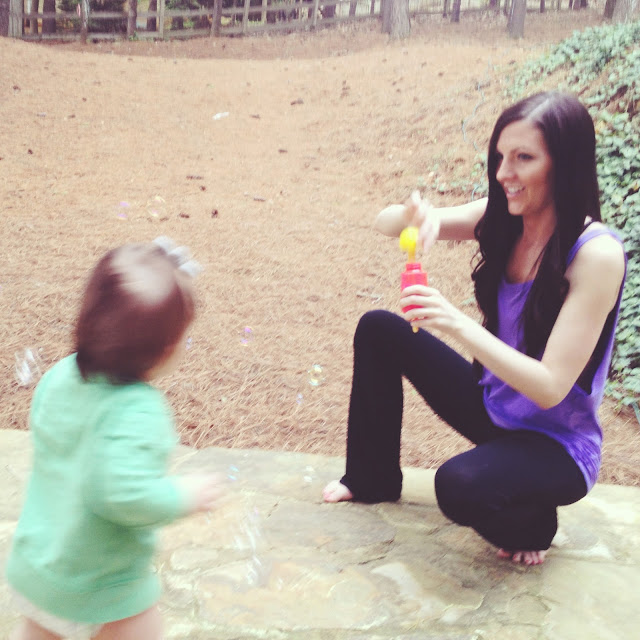 In addition to the fake laugh, we also now have a fake sneeze. So funny. (short video here)

Mom’s Proudest Moment: Yelling “DUDE!” when the cat tipped over my glass of ice water the other day, which prompted Harper to then yell “DOOOOOO!” Thanking my lucky stars that, for once in my life, I actually watched my language. Parent of the month award? Obvi.
Dad’s Proudest Moment: Playing “hats” with Harper’s food bowls, which prompted her to pick up the cat’s water bowl shortly after & dump it on her head. 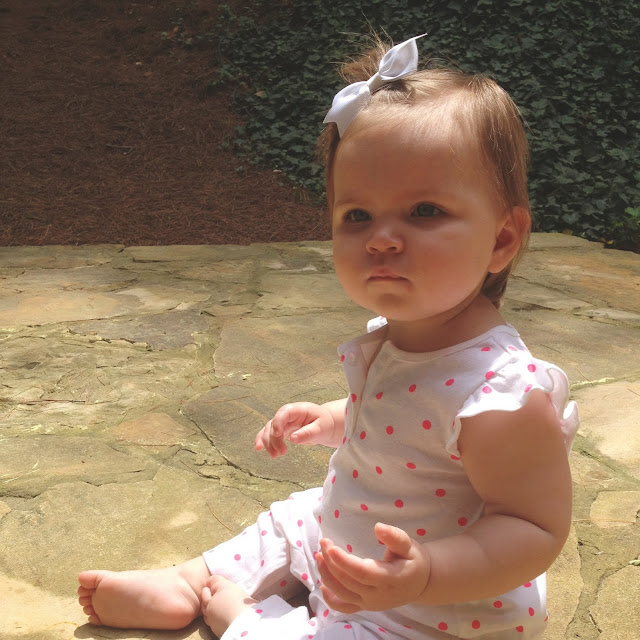 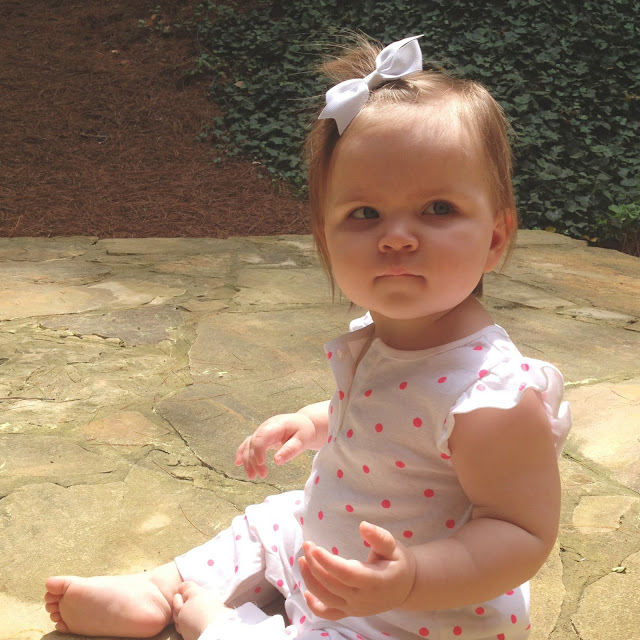 Flutter Sleeve Piece
Have I already mentioned how much this age rocks? 🙂
You can find the rest of our month by month favorites here.
6
Birthday & Beergaritas.
Beachbound Baby. 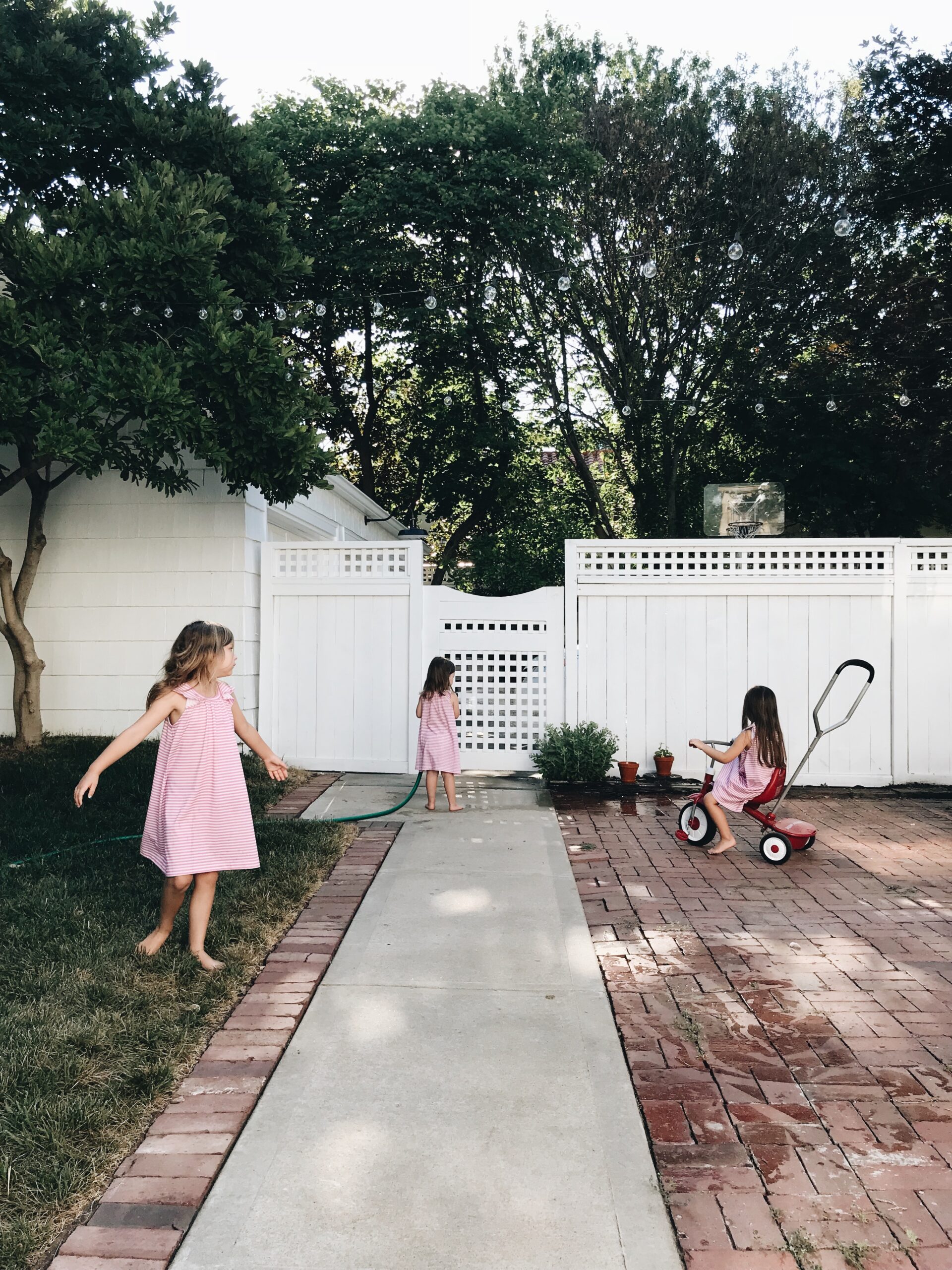 Five Things To Do With Your Kids This Summer.
What happens when you don’t play with your kids.